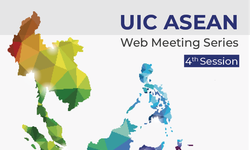 The fourth in a series of UIC ASEAN online meetings was held on 25 February, with a focus on railway standards and standardisation and access to UIC tools in this field. Co-organised by UIC Asia-Pacific and the UIC Standardisation Department in collaboration with the Rail System Department and the Sustainable Development Unit, the meeting offered an opportunity to share expertise and introduce all of the relevant tools and information to UIC ASEAN members.

Potential future members of UIC in ASEAN, such as Lao PWTD-DR, Lao Railway Authority and Myanmar Railways, took part in the session along with 23 participants from a total of eight member companies (DJKA and MASKA of Indonesia, KTMB, MyHSR CORP and RAC of Malaysia, DOTR and PNR of the Philippines and VNR of Vietnam). Invited representatives from NRCOE Malaysia also attended the meeting.

The meeting was moderated by Milko Papazoff, UIC ASEAN Representative. Vincent Vu, UIC Director of Institutional Relations and Asia-Pacific Coordinator, opened the session by recalling UIC’s role and its development in Asia-Pacific.

On behalf of Celia Lévy, Chief Standardisation Officer, Mouna Bennouna, Programme Coordinator within the UIC Standardisation Department (SD), gave a comprehensive presentation of the SD and its Platform, outlining the current railway ecosystem and the role of UIC as an SSO (Standard Setting Organisation), as well as the regulatory framework for IRSs (International Railway Solutions) and agreements concluded with other international organisations, such as ISO, IEC, CEN, CENELEC, etc. A detailed overview of the ongoing process of migration of UIC leaflets to IRSs was also provided. Ms Bennouna invited the participants to attend the third International Railway Standardisation Conference being held online on 16 March 2021.

An example of the process of development and application of a standard, IRS 90940 (Data exchange with Driver Advisory Systems (DAS) following the SFERA Protocol), was then presented by Philippe Stefanos, Sustainability Advisor within the UIC Sustainable Development Unit.

SFERA stands for “Smart communications for Efficient Rail Activities”. Mr Stefanos explained all of the steps involved in preparing an IRS, from the initial stages to review and final publication, in order to demonstrate how railway standards are developed and why they are useful to the entire railway ecosystem. The presentation helped the audience to understand the importance of UIC’s working groups and user groups, composed of UIC members and railway industry stakeholders.

Hélène Cambreleng, ETF Manager, UIC Publication Department, then gave a presentation on ETF (Railway Technical Publications), explaining its role and how to efficiently use and download documents from the UIC website. She invited participants to register for the UIC newsletter, which provides regular updates on available documents.

The participants had several questions on the use of standards at national level. Thanks go to our Indonesian colleagues for their contributions.

The next in the series of UIC ASEAN online meetings will be held on 25 March, focusing on the UIC Passenger Department with a special emphasis on railway stations.