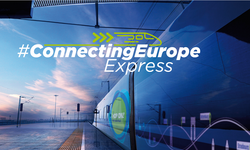 The ’Connecting Europe Express’, a special train put together as part of the European Year of Rail 2021, will pull out of Lisbon station on 2 September. It will stop in more than 100 towns and cities during its five-week journey, before arriving in Paris on 7 October, connecting the Portuguese, Slovenian and French Presidencies of the Council of the EU.

European Commissioner for Transport, Adina Vălean said: “Rail has shaped our rich, common history. But, rail is also Europe’s future, our route to mitigating climate change and powering economic recovery from the pandemic, as we build a carbon-neutral transport sector. Over the coming weeks, the Connecting Europe Express will become a rolling conference, laboratory and forum for public debate on how to make rail the transport mode of choice for passengers and businesses alike. Please give us a warm welcome when we stop at a railway station near you.”

The Connecting Europe Express is the result of unique cooperation between the European Commission and the Community of European Railway and Infrastructure Companies (CER), European rail operators, infrastructure managers and numerous other partners at EU and local level. Along the route, various events are planned to welcome the train at railway stations across Europe. Rail enthusiasts can also follow debates happening on board as well as conferences on EU infrastructure policy and the role of the Trans-European Transport Network (TEN-T), that will be livestreamed via the event website from Lisbon, Bucharest, Berlin and Bettembourg.

CER will also welcome the train in Gdansk, where rail CEOs will gather for the CER annual General Assembly, kindly hosted by Polish State Railways (PKP). Members of the European Parliament and representatives of the organisation Erasmus by Rail have also been invited to join an event in Strasbourg during plenary week, organised in collaboration with SNCF, which will focus on the topics of youth, rail and sustainability.

CER Chair and CEO of Austrian Federal Railways, Andreas Matthä emphasised the significance of the joint project: “The Connecting Europe Express is impressive proof of the success of the European Year of Rail, at the same time it points out our joint challenges ahead. CER members are committed to make the Green Deal a success. A strong European railway sector is vital for achieving the EU climate targets. Currently there are too many technical barriers in cross-border rail transport and it is very complex to run a train across national borders in Europe. We need to continue to shift freight from road to rail, provide efficient services for daily commuters and expand international long-distance passenger rail transport with day and night services. I am convinced that the Connecting Europe Express will raise awareness of these challenges. I would like to thank all colleagues and partners who made this project possible and wish the Connecting Europe Express a good journey.”

Background The Connecting Europe Express was made possible by partners from the European railway sector and institutions on EU, national and local level joining forces. Due to the different gauge widths in Europe, the Connecting Europe Express will comprise, in reality, three trains – the Iberian train, the Standard train and the Baltic train – that will meet along the route. The project is a reminder of the lack of interoperability between some parts of Europe’s rail network, but it will also demonstrate the very good cooperation in place between railway undertakings and infrastructure managers.

The coaches have been provided by different European railway companies. One of them, provided by MAV (Hungary), will host a mobile exhibition organised by the European Climate, Infrastructure and Environment Executive Agency (CINEA) and the Shift2Rail Joint Undertaking. It will showcase the many existing technologies and innovations improving the rail experience, and show how the EU supports infrastructure projects. A conference coach (provided by SNCF, France), two standard seating coaches (DB, Germany and SBB, Switzerland), a dining coach (FS, Italy) and a sleeper coach (ÖBB, Austria) will complete the standard train. The Iberian train travelling between Portugal and Spain has been provided by Spanish operator Renfe, while Lithuanian LTG is operating the Baltic train.

In the context of the ongoing pandemic, safety has been prioritised in the organisation of all activities around the Connecting Europe Express. Some events will be livestreamed, and train enthusiasts are encouraged to welcome the train in certain stations.

UIC is pleased to participate to this operation.